Since Australian Greens Senator David Shoebridge announced he’ll be introducing legislation into federal parliament with the aim of legalising cannabis for recreational use, there’s been a distinct feeling in the air that this is going to come to fruition.

And there’s also been a groundswell of Australians gleefully responding, “Yes, please.”

Gone are the days when locals bought the 1930s US Federal Bureau of Narcotics “reefer madness” propaganda. And this might have something to do with 19 US states, the capital Washington DC and the territory of Guam having already legalised the plant that’s been used for millennia.

Shoebridge announced on 26 September that he’d consulted with leading constitutional law expert Professor Patrick Keyzer, who’d confirmed that, despite questions circulating about this possibility, cannabis can indeed be legalised nationwide via federal parliament.

And on the following day, the Greens justice spokesperson gave notice that on 28 November, he’ll be introducing the Legalise Cannabis Bill 2022 into the Senate, which will “legalise and regulate the production, supply and use of cannabis”.

No one is suggesting that cannabis is completely harmless. But in terms of popular psychoactive substances taken recreationally, it’s definitely down the low end of the scale on harms caused.

Unlike alcohol, the herb is not known to trigger violent behaviour, and nor can it kill you, like a couple of bottles of whiskey can. And no one’s pushing for a ban on alcohol. Indeed, there’s even a bar serving booze at Parliament House in Canberra – just ask Barnaby Joyce.

The National Drug Strategy Household Survey 2019 report outlines that 36 percent of Australians have used cannabis at one stage, while over 11 percent had used it in the last 12 months. And that regular use figure has hovered just above the 10 percent mark for years now.

According to Shoebridge, the major harm relating to cannabis at present is to do with its criminalisation and the consequences that brings in terms of coming into contact with law enforcement and the courts.

Over 90 percent of cannabis-related arrests in this country are for personal use. Legalisation means that the 10 percent of the population who do use it will no longer be criminals. And the general trend overseas is those who partake now will continue to, while very few nonusers will take it up.

Of course, then there’s the tax revenue. Since the first retail sale in Colorado on 1 January 2014, the cannabis industry in that US state has raked in over $12.2 billion, and more than $2 billion of that has been in taxes. And last year saw over 35,500 locals employed in the industry.

Sydney Criminal Lawyers spoke to Greens Senator David Shoebridge about why legalising cannabis is a no-brainer. 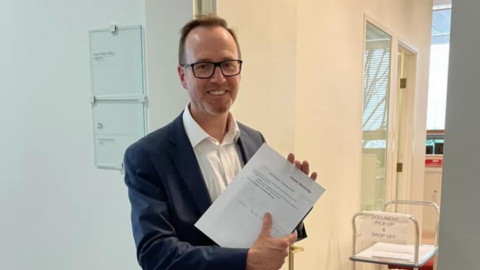 Why was it necessary to obtain this? And what’s the gist of what the lawyer told you?

This has never been done before: moving to legalise cannabis using the federal parliament, and in a single act of parliament, legalising cannabis across the country.

However, law reform at a state and territory level, faces significant institutional resistance from the law and order lobby, most particularly the police and police unions.

So, we sought constitutional advice about whether the Commonwealth parliament could legalise cannabis.

I initially thought the external affairs power might be the avenue. But the advice we received from Patrick Keyzer, one of the leading authorities on constitutional law in the country, is the clearest route lies using the patents power and there’s clear legislative and case law precedence for that.

That means regulating cannabis by listing the various strains and using that patents power to create the market.

I’ve seen a few remarks on social media claiming there are more pressing matters to see to rather than cannabis legalisation.

Why is legal weed something we should be promptly getting across the line?

There are hundreds of thousands, if not millions, of Australians very excited to finally get this long-awaited law change.

I would expect there would be a minority of right-wing commentators critiquing the timing. But what’s remarkable is, the traditional angry right-wing hate, based upon fearmongering, has almost disappeared.

All of the passion in this debate comes from the pro-legalisation side of the record.

The very twentieth century angry right-wing intolerant opposition is now pretty much reduced to complaining about the timing.