On November 3, 2021, New York’s Cannabis Control Board (CCB) held its third public meeting during which it made additional progress in developing the regulatory landscape contemplated by the Marijuana Regulation and Taxation Act (MRTA). The developments from the meeting and its implications are detailed below.

While much attention is focused on New York’s adult-use cannabis market, the CCB and Office of Cannabis Management (OCM) are also responsible for overseeing both the Medical Marijuana and Cannabinoid Hemp Programs. Accordingly, the CCB’s first three meetings have focused on (1) staffing the CCB and OCM, (2) publishing medical home grow regulations, and (3) finalizing Cannabinoid Hemp Program regulations.

As detailed in our previous post, the MRTA required the CCB to “issue rules and regulations governing the home cultivation of cannabis by certified [medical marijuana] patients . . . no later than six months after the effective date of the MRTA.” The six-month deadline expired on September 30, 2021, with no regulations drafted, so the CCB needed to play catch up, which it did last meeting.

Similarly, the MRTA requires the CCB “[t]o fix by rule and regulation the standards and requirements of cultivation, processing, packaging, marketing, and sale of . . . cannabinoid hemp and hemp extract.” Prior to the MRTA, the New York State Department of Health was responsible for developing the regulatory scheme for the Cannabinoid Hemp Program. Between October 2020 and May 2021, the DOH issued, published, received public comment on, and finalized proposed hemp regulations. However, because the MRTA transferred control of the Cannabinoid Hemp Program to the CCB, the DOH’s “final” regulations were stuck in limbo since their May 2021 publication. The CCB changed that on Wednesday, with notable changes to the Hemp Program summarized in the slide below: 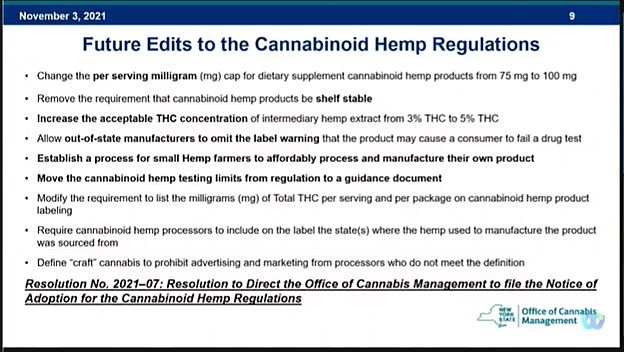 Although the regulations released did not concern New York’s Adult-Use Program, the CCB’s hemp-focused meeting is still important to the development of the Empire State’s adult-use market. By checking off statutory requirements like publishing medical home-grow regulations and finalizing the hemp regulations, the CCB is making necessary progress to put itself in a place where it can publish adult-use regulations. OCM Executive Director Christopher Alexander even noted that the OCM was preparing the first public health and safety campaign for the Adult-Use Program, as summarized in the slide below: 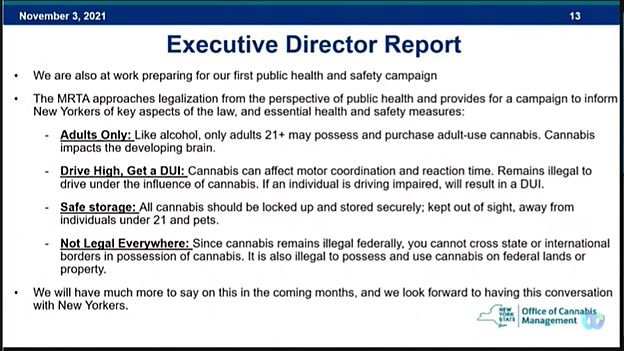 After six months of delay out of the gate, the developments in the Medical Marijuana and Cannabinoid Hemp Programs come as a good sign for the state’s cannabis industry, and, as discussed below, proves that the CCB is that much closer to adult-use rollout.Delta-8 Banned (For Now)

The most newsworthy headline for New York cannabis consumers from the CCB’s third meeting was the announcement that the sale of Delta-8 products is banned effective immediately “due to [Delta-8’s] psychoactive properties.” The CCB intends to address the sale of such products in the adult-use regulations.

For those unfamiliar, Delta-8-tetrahydrocannabinol, colloquially referred to as “Delta-8,” is a psychoactive cannabinoid that is naturally occurring in the cannabis plant. As described by the FDA: “Delta-8 THC has psychoactive and intoxicating effects, similar to Delta-9 THC (i.e., the component responsible for the ‘high’ people may experience from using cannabis).” Delta-8 is said to produce a “milder high” due to weaker chemical bonds than Delta-9-THC. More importantly, Delta-8 is arguably legal to sell due to a grey area in federal legislation.

The Controlled Substances Act (CSA) explicitly prohibits the sale of Delta-9-tetrahydrocannabinol (a Schedule I federal substance), while the Agricultural Improvement Act of 2018 legalized hemp and its derivatives (e.g., CBD products). Since Delta-8 is naturally occurring in the hemp plant (a cannabis plant containing less than .3% Delta-9 THC on a dry weight basis), cultivators and processors have been able to “legally” grow and create products containing the compound within federal law. In fact, the United States Drug Enforcement Agency (DEA) issued a private letter ruling in September 2021 making clear that so long as Delta-8 has been extracted from a hemp plant (rather than a marijuana plant that contains .3% or greater Delta-9 THC by dry weight), the products containing the compound do not violate the CSA.

However, due to the psychoactive nature of Delta-8, a number of states began banning sales of products containing the compound. The DOH’s May 2021 final regulations specifically carved out Delta-8, making sales of products containing it impermissible under the Cannabinoid Hemp Program. Nevertheless, the finality of these regulations remained in limbo until the CCB took charge of the program. As such, the CCB’s ban did not come out of left field, but rather solidified a previous pronouncement that hung in the balance until the Cannabinoid Hemp Program officially came under the umbrella of the CCB and OCM. Adult-Use Timeline

Finally, although it did not occur at the CCB’s third meeting, much has been made of CCB Chair Tremaine Wright’s comment at the Cannabiz Symposium in Rochester, New York, about when potential cannabis businesses will receive adult-use retail licenses. Specifically, Wright stated: “What we do control is getting [dispensaries] licensing and giving them all the tools so they can work within our systems. That’s what we are saying will be achieved in 18 months. Not that they’re open, not that they’ll be full-blown operations, because we don’t know that.” Under this timeline, New Yorkers can expect to see retail sales in approximately April of 2023.

While two Aprils from now may seem like a long time for New York cannabis consumers, this may be the most realistic amount of time for the CCB and OCM to develop the state’s cannabis supply chain and for cannabis entrepreneurs to get their businesses in order. Under the MRTA, whatever adult-use products are sold by New York dispensaries, on-site consumption lounges, or micro businesses must be grown here, processed here, and distributed here. The first step in that process is getting seeds in the ground, and the first step towards that is issuing the regulations pertaining to cultivators that will inform the application process.

Since each regulatory scheme released by the CCB and OCM must go through a 60-day comment period, after which the administrative bodies will incorporate appropriate comments and finalize the regulations, an 18-month timeframe seems most likely. As the CCB and OCM continue to check off their non-adult-use statutory obligations, it becomes increasingly more likely that the framework of the cultivation process is coming down the pipeline sooner rather than later.

What does this mean for New York cannabis entrepreneurs? It’s time to get your business affairs in order. Finalize draft business plans. Get corporate documents in order. Speak with local politicians about municipality opt-outs and zoning. Formulate a brand. These are just a few pieces of the puzzle. And once the first cultivation regulations are released, it is only a matter of time before retailers come around. So, no matter what part of the supply chain you intend to be on, the time to prepare is now.

Lippes Mathias’ Cannabis Practice Team will continue to monitor the developments in New York’s cannabis industry, including when the CCB regulations are published and when applications are expected to be released. If you have any questions, please contact one of our attorneys.