Candid Chronicle: If Lemon Grove Were Ever Waiting For A Sign… This Is It

Lemon Grove city staff and council recently approved a 70-foot tall digital billboard that will advertise various businesses, including legal cannabis dispensaries and various marijuana products. As cannabis shops have been designated an “essential business,” this could be a lucrative source of revenue for the city.

According to the agreement, the billboard project is intended to make use of city held property and generate revenue from it. All ads to be displayed will be strictly considered “commercial advertising” and not intended for public announcements. The deal could generate up to $300,000 per year for Lemon Grove.

Coincidentally, the billboard will be located just a few feet from 3648 Olive St. The property was recently denied a permit to operate a medical marijuana dispensary by Lemon Grove city staff. Yet, the city of Lemon Grove will profit share from the sales of cannabis just a few yards away. City staff’s decision to deny the dispensary was immediately appealed and is set to be heard on May 5, 2020. The property owner believes if the city thought the location was appropriate to promote cannabis directly above his property, it only makes sense that the location meets all distance requirements to open a medical marijuana dispensary.

“What is good for the goose is good for the gander, right? The city could use the money, more importantly, the taxpayers voted for cannabis back in 2016. It’s a no brainer.” says Teresa Rosiak, Lemon Grove resident who ran for office in 2018. Rosiak is still undecided if she will run for mayor or city council in 2020.

In March, the residents of Lemon Grove rejected a measure to increase the local sales tax. The city’s projected deficit will be almost $1,300,000 by 2021. Lemon Grove’s budget shortfall is well known and could force the city to file bankruptcy. On top of safe access to locals and visitors who have the right to consume cannabis, the dispensary could provide much-needed tax revenue for the city as it teeters on disincorporation. Medical cannabis is already legal in Lemon Grove, and there have been many discussions about how the new industry can help the city’s finances.

“Keep in mind that these marijuana businesses will pay no local taxes,” Councilman Jerry Jones wrote in an editorial.

“This would be, by far, the largest tax, or fee levied on medical marijuana dispensaries by any jurisdiction in San Diego County,” author of Measure V, Cynara Velasquez, wrote in an Op-Ed for Voice of San Diego titled “Don’t Believe Lemon Grove Officials’ Medical Marijuana Fear-Mongering.” Many California cities do not require any patient fees for sales of medical marijuana.

“First objective is to get the three we’ve approved up and open. We need history behind us before making the next step. The Grove is close, the other one on Federal doesn’t appear to be moving, and the third applicant seems more interested in suing the city for denying two of his three applications than opening the one we approved two years ago,” wrote City Councilman Jerry Jones via the NextDoor App.

The property located at 3648 Olive St. has been vacant for almost two years. The application to open a medical marijuana dispensary was denied on December 3, 2019, because city staff claims the proposed location is within 1,000 feet of a public park.

“It is like the city just makes stuff up as they go. The denial is beyond puzzling; a trolley stop isn’t a park. The proposed location is on a dead-end street and practically as far north in the city as you can get. They just approved a gigantic billboard that will flash cannabis ads less than a few feet away. It doesn’t make any sense.” says a nearby property owner, who spoke on condition of anonymity for fear of retribution.

The denial letter provided by Community Development Manager Noah Alvey is vague. The letter does not include an address used to determine the boundaries of the park, typically common practice when disclosing the reasons for any permit denial. It appears that staff began measuring from the trolley station owned by Union Pacific Railroad Co., from the corner of Lemon Grove Ave and North Ave to the proposed dispensary location. Prior to the proposed dispensary application, numerous online searches show the area has been known as the Main Street Promenade by city employees and the mayor.  From April 28, 2016 – November 3, 2019, there were 31 images posted by city staff and Mayor Vasquez, which all refer to the area as Main Street Promenade, including images from the mayor’s campaign kickoff rally. In the same time period, there were zero images from staff or the mayor that mentioned a Promenade Park. The application to operate the marijuana dispensary was filed on September 30, 2019. Curiously, the first image identifying the area as Promenade Park was posted by Mayor Vasquez on November 4, 2019. The image she posted lists the address for Promenade Park at 3240 Main St. an address that is well outside the 1,000 feet separation requirements. 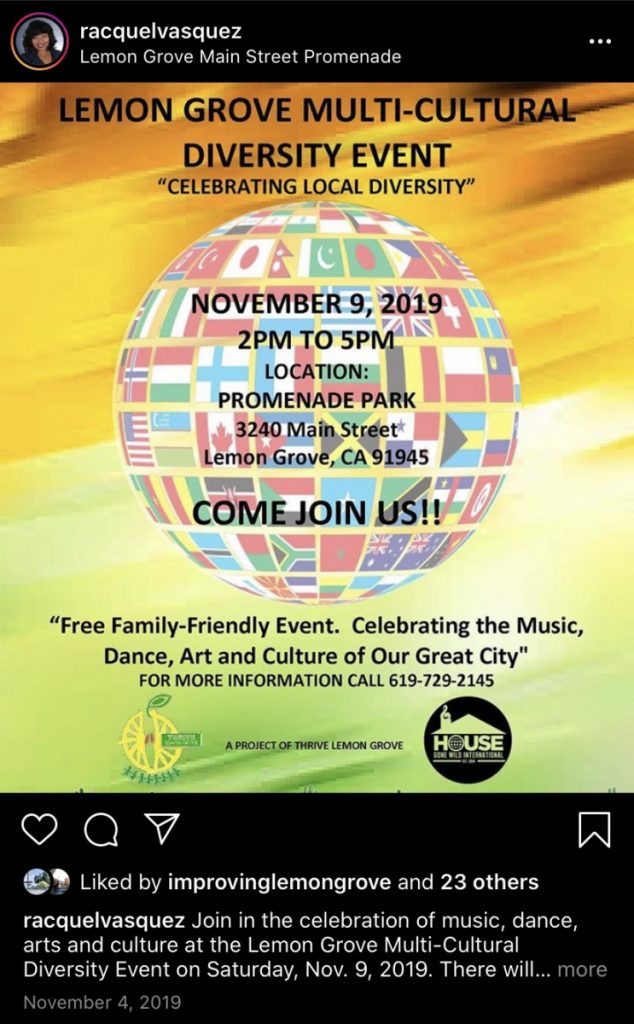 Is Main Street Promenade, by definition, a park or open space?

Lemon Grove Municipal Code 12.20.030 defines “Park” or “City Park” as the land easements owned or leased by the city of Lemon Grove, which by ordinance resolution, encroachment permit, regulation, or agreement, are dedicated to or operated by the city for purposes of sports, community gardens, and public recreation.

The property used in the measurement test by city staff is not owned or leased by the city. There is no community garden, and no sports activities occurring in the area. There is no address issued to the common area, contrary to every park owned or leased by the city of Lemon Grove. Most importantly, unlike the existing “parks” in the city of Lemon Grove, the Main Street Promenade generates no revenue and is unable to subsidize any costs of maintenance. The trolley expanse is not available to rent by the hour for recreation or special events by the public like all the other Lemon Grove parks.

Lemon Grove Municipal Code 17.08.030 defines “Open Space” as an area of land set aside, dedicated, designated or reserved for public or private use or enjoyment including, but not limited to, uses such as community gardens, or for the use or enjoyment of owners and occupants of and adjoining or neighboring such land.

The parcel in question connects the Citronica I and II high-density developments, the business district, and the Lemon Grove Trolley Depot. Under the rules of Measure V, open space is not considered to be a sensitive use. Meaning there are no rules prohibiting a dispensary from opening next to “open space” in the city of Lemon Grove. *

Lemon Grove’s decision to deny the Olive St. property a permit will have a ripple effect. Beyond no potential revenue from the medical marijuana dispensary, litigation is also possible and something the city can’t afford. The city is already facing its fair share of lawsuits. There are at least three active lawsuits from applicants for medical marijuana dispensaries, including one from the applicant of 3648 Olive St. In addition to litigation, the decision may force change to the agreement with Outfront Media or give the BCC all it needs to cite Lemon Grove for violating commercial cannabis advertising regulations. Which could leave the cash strapped city forced to pay state fines of up to $5,000 per day. A public hearing to appeal city staff’s denial of the dispensary is scheduled for 6:00 pm on May 5, 2020, by virtual meeting. The public is encouraged to participate.