Back to the BRC: “The ability to tax cannabis is one of the main political reasons given to support recreational legalization. A successful tax system will need to raise money to pay for increased education, public health and enforcement costs associated with marijuana cultivation and use.” 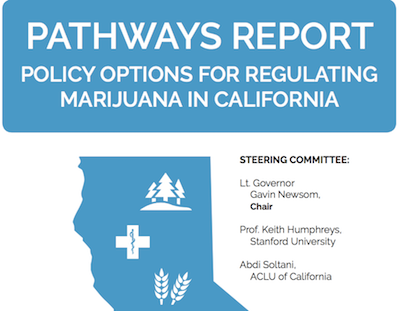 If you wish to re-publish this story please do so with following accreditation
AUTHOR: “Jordan Zoot.  “aBIZinaBOX Inc., CPA’s”
PUBLISHER:  CANNABIS LAW REPORT

Back to the BRC – while 2015 seems like ancient history, however, that was when then Lt. Gov. Gavin Newsome’s Blue Ribbon Commission published “Pathways Report – Policy Options For Regulating Marijuana in California” which contained a detailed analysis of the policy choices that were to be considered in what gave California Proposition 64 and subsequently SB 94 which led to the system of regulation for the legal cannabis industry that exists in California today.

While we could devote a book length article to a present day critique of that report we are going to limit our thoughts to a review of the Tax Policy component of the report which appears on pages 48 through 56. The section, “Taxing Marijuana” begins by noting

“The ability to tax cannabis is one of the main political reasons given to support recreational legalization. A successful tax system will need to raise money to pay for increased education, public health and enforcement costs associated with marijuana cultivation and use.”

California will have to wrestle with when and, how to tax marijuana. Each decision has trade-offs that must be considered by policymakers. Yet it still remains that a logical and effective taxation system can help establish effective broader public policy. Regulators and decision makers should consider how to set up a tax scheme that will help them achieve the core goals of legalization policy that have been stated earlier in this report.

In drafting any taxation scheme, it is important to devise a plan that can be administered and enforced effectively. Tax policy can be the driving force for public policy only if it is effectively enforced, and effective enforcement will result only from systems that can be properly administered. Tax and regulatory compliance should be simple to execute and formulated in a way that makes compliance desirable to market participants.”[1]

If we were to just STOP AND REFLECT after only having gone that far, the admonishment couldn’t have been more profound. The greatest challenges that highly regulated system which was initiated by the California Legislature and embellished by the regulatory and tax agencies they created are principally burdened by excessive complexity and difficult in both participant compliance and agency administration. We have commented at length in recent articles with our suggestions to correct both aspects.

The BRC considered the triumvirate of Price vs. Weight vs THC and ultimately adopted Price for the Cannabis Excise Tax [“CET”] and Weight for the Cannabis Cultivation Tax [“CCT”]. We are going to expressly reserve comment on the THC choice which is CLEARLY the appropriate choice for applying tax to the product of manufacturing [eg. extraction for the production of vaping cartridges and edibles].

Taxing by percentage of sale price seems easy and quick. But calculating marijuana taxes as a percentage of price creates the danger that taxes will be, at first, too high, and then later too low. Initial business start-up costs and possible shortages in supply can drive up the retail cannabis cost in the beginning, artificially creating more tax revenue. But then as businesses and the market mature and production costs go down, tax revenue will decrease.

Taxes that are too high make prices for the legal market unattractive to consumers relative to the prices for the untaxed illicit market. This results in two negative effects:

“That’s why Colorado’s original 15% price-based producer tax was converted to a weight base—so the state has something it can measure.   In many cases, there is no actual producer price to tax. Colorado originally required producers to sell directly to consumers (forced vertical integration). When the producer is not a separate entity from the retailer, there is no “arm’s-length,” or actual, producer price.   The absence of an arm’s-length market price caused the state to estimate an “average market rate” which it uses to compute a weight-based tax. This average market rate, adjusted every six months, applies even to sales between unrelated parties.”[2]

We see the consequences of this approach, particularly the imputation of an arbitrary rate of mark-up in the CET. The alternative “weight-based” approach was utilized in the CCT.

“A weight-based excise tax has the advantage of creating a kind of price floor under the market and guaranteeing at least some government revenue even in the event of a marijuana price collapse. Assessing tax on the basis of the weight sold raises potential arguments about when the weight should be assessed (e.g., at the farm gate, at the processor, at the retail outlet) and how to account for the fact that, as a harvested plant, marijuana will change in weight as it loses moisture.

A further challenge of a weight-based tax is that it could incentivize producers to make extremely high-potency products so as to reduce the amount of tax per unit of THC sold.”[3]

Targeting a tax directly at intoxication might seem a theoretical best practice. Some have suggested taxing THC, the primary intoxicant, directly—or adjusting the tax down for the presence of CBD, which may have a mitigating effect on THC. Indeed, measuring THC in homogeneous concentrates, before incorporation into edibles and other products, might yield reliable and replicable results. But measuring THC in raw plant material, like dried flower, is more problematic.

Our financial modelling of California’s cannabis taxes raises a couple of additional factors that have had a significant impact on behavior by participants in the cannabis supply chain. The levels of mark-up and profits sought by Cultivators vs. Distributors vs. Dispensaries have significant impact on the market. The instances of integration such as Cultivators owning distribution and manufacturing entities through Cannabis Cooperative Associations [“CCA’s] could become significant “disruptors” to the vertically integrated, larger players such as Flow Kana which have recently emerged.

There are several points in the supply chain where cannabis taxes can be assessed cultivation and at the retail level. The may be additional points for assessment of tax if manufacturing or distribution components are involved in the process. We have observed that each of the state with legal cannabis has adopted a combination of the methods in different configurations. Each of the methods has advantages and disadvantges that need to be evaluated in the context of both revenue and policy objectives. .

Also, because marijuana prices and marijuana consumption will change over time, certain types of taxes may offer more stable tax revenue and consistent after-tax prices than others.

“If we put aside the risks of leakage and tax evasion, late collection has certain apparent advantages – despite the “collect early” guideline. With any chosen ad valorem tax percentage on price, imposing it as late as possible gives the state more revenue, since the price of any product ordinarily rises as it passes through the supply chain. For instance, a 20% retail tax will collect more revenue than a 20% production tax, since the retail price is normally higher than the production prices. If, instead of a particular percentage, the state seeks a specific dollar amount of revenue, taxing later in the supply chain usually results in lower consumer prices, since retailers tend to add a percentage of profit margin based on their costs, including the cost of taxes.”[4]

We have no illusions [or delusions] that our thoughts will become the basis for the California regulatory and tax agencies to make change in tax rates or policy. However, what we do know is that unlike many that merely speculate about forces that impacted the highly regulated cannabis market, we have derived substantial insight by “pushing the numbers” and observing relationships between both the cost components, and the behavior of the market participants.

We hope our readers are developing a sense of those relationships as well.